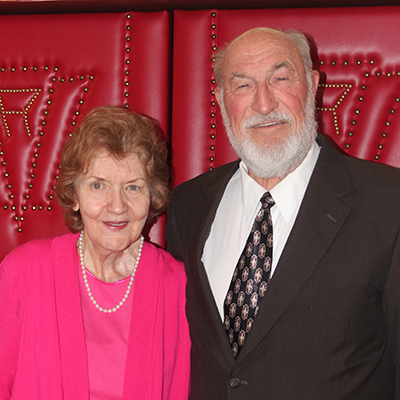 Movies have always been a big part of Chuck and Julie Wisehart’s lives, from their formative years in Humphrey and Norfolk, respectively, to today. The couple, who owns the Rivoli Theater in Seward, has been chosen as the Nebraskan¹s Friend Award winner for the 2014 Fourth of July celebration. Julie said she started going to movies with her mother when she was about five.

“Mom loved plays and the theater, and so do I,” Julie said, adding that she also went to movies with her cousins and friends.

In a May 18 interview for an upcoming documentary on the Rivoli, Chuck said one of the first movies he remembered seeing was about Africa. When the two started dating, they went to the movies, Julie said. “One of the first I saw with Chuck was ‘What’s New Pussycat,'” she said with a laugh.

The Wiseharts moved to Humphrey after they got married. They moved to Omaha while Chuck was attending school for the Nebraska State Patrol and came to Seward when Chuck was posted here.

Julie said living in Seward was a dream of hers. She and some friends came to a convention in Seward when they were in high school. They walked from Concordia College (now university) down to the Corner Café, now Café on the Square, for lunch.

“I said I hope I can live here someday,” Julie remembered.

When Chuck received his posting to Seward, Julie said, she was getting ready to hang up a load of laundry. “I skipped down the sidewalk,” she said, grinning.

She worked at various jobs in Seward before starting part-time at the Rivoli Theater. Chuck and Julie continued going to the movies at the Rivoli, which was just one screen and the lobby, Julie said. “They had a phone in the lobby. I thought that was special,” Julie said, adding that parents could call home to check on children if needed, a babysitter could call for the parents if there was a problem, and it didn’t take long to get home from downtown Seward.

It took five years before the Wiseharts purchased the business on March 29, 1979.

“We had thought about it for awhile,” she said.

“It looked like fun,” Chuck said in May. “I thought it would be interesting to run a theater.”

They bought the Isis Theater in Crete at the same time, and Julie spent the next 27 years driving back and forth to Crete to manage the two theaters. The first movie the Wiseharts showed in Seward was “Comes a Horseman” starring Jane Fonda, James Caan and Jason Robards. That same week, they showed the re-release of “Pinocchio” in Crete, Julie said. When the Rivoli started offering videos to rent in the 1980s, Julie said, the display was on the east side of the lobby. The videos were stored behind the counter.

The Caboose Café was located just east of the theater and served great hamburgers and pie, Julie said. When it burned down, the Wiseharts bought the property, added on to the theater building and opened a video rental store.

One of the concerns with the video rental business was the possible impact on the movie theater, Chuck said. However, it didn’t hurt the Rivoli, he said.

Chuck and Julie have worked to keep the Rivoli up to date. They upgraded the sound system to digital and installed new seats.

“When we buy, we get the best,” Chuck said. “If it helps people to enjoy the movie, that is what we’re here for.”

Last year, the Rivoli added a second screen, which was something Julie had wanted for some time. Adding that screen increased the theater’s capabilities to show more films and 3-D. In addition to showing movies, the Rivoli stage has also seen several theatrical productions and a wedding. The theater has also hosted art shows by Concordia University students, Julie said.

“Anything to do with the arts,” she said.

Julie loves playing the classics and heartfelt movies, stories that tug at your heartstrings. Chuck said his favorites can change, but “there are very few movies I don’t like.” He said the first Star Wars movie was the best, seeing the whole screen filled with the Imperial Star Destroyer was amazing, he said. The jets in Top Gun tested the theater¹s sound system, Chuck said.

Bringing movies to the Rivoli is something Julie is always working on. When she started at the theater, she would call the film companies to book new releases. Today, she said, much of that is done via e-mail instead of over the phone, and she misses that personal touch.

“I love talking to people,” she said.

The film distributors are primarily in New York and Los Angeles, she said, with one in Dallas. In the past, there were distributors in Chicago, Omaha and Kansas City that she worked with.

The Wiseharts used to attend the Show West convention in Las Vegas where they learned about the upcoming releases and met some of the movie stars. Those kind of opportunities aren’t available any more, she said.

The film formats have changed, as well. When Wiseharts bought the Rivoli, movies would come in 2,000-foot reels, Chuck said in May. He would splice the reels together and load them on the projector to show. Today, the films are digital, don’t require any splicing and are much easier to operate, he said.

One of the challenges theaters everywhere face is electronics, Chuck said. With the proliferation of hand-held electronics, smart phones and games, not as many junior high-age students are coming to the movies. But Chuck likes seeing the kids come to the theater. Now, people who were kids when the Wiseharts started are bring their own children.

Eventually, the Wiseharts would like to pass the theater on to their children.
“As long as people support us, we will be here,” Chuck said.