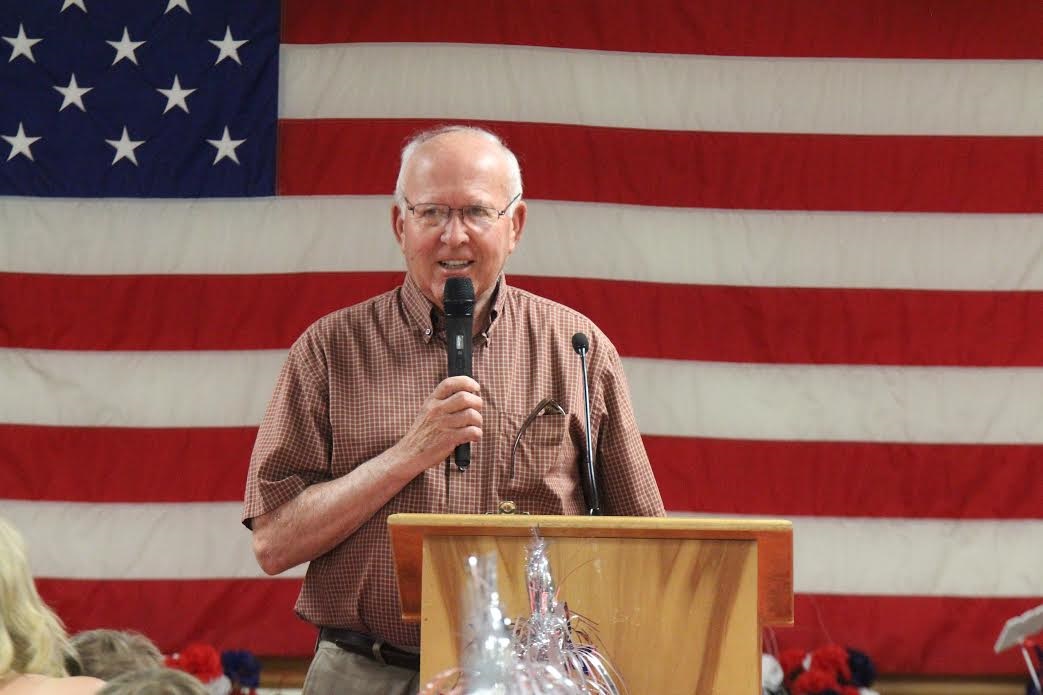 Richard “Dick” Stillahn was named the 2019 Seward County Community Service Awardee and honored at the annual Seward Fourth of July Celebration.  The longtime, respected business leader and experienced community volunteer was selected over 30 other nominees in a countywide nomination/election.  He is married to Rolene (Brinkmeyer) Stillahn and they have three children and five grandchildren.

“He’s the type of person you love to work with on any project.” said NENG Historian Gerald Meyer.

Meyer and Stillahn have to come to know each other through the museum over the last five years!

“He just does things that need to be done and he’s very community-oriented,” said Meyer.

Stillahn also volunteers a lot of his time to the Seward Cross Makers, where they make palm crossed for sale with the money being reinvested into the community.

From starting in a friend’s garage to celebrating the 100,000th cross earlier this year, Stillahn has been there through it all, quietly working behind the scenes.

“We are so proud to honor Dick Stillahn, as he has devoted his life to service in the community, to his church and to his friends and family,” Clark Kolterman, July Fourth Committee representative stated.

Stillahn has always been one to lead people and lend a hand when needed. He has been a part of the Kiwanis Club since the mid 1960’s, now serving as a board member.  Kiwanis is an international organization involved in community projects and fundraising efforts for Seward County and children worldwide.

Stillahn has certainly taken every opportunity throughout his life to serve and improve the Seward County Community.  He worked hard behind the scenes and is more focused on getting the job done as opposed to receiving accolades, which makes this award all the more warranted.  In his early years of business at the Jones Bank, he served the community as an active member of the Seward Jaycees, involved in a host of activities in Seward and participated in many of the projects of the Seward Chamber of Commerce as well.

“This award was certainly a surprised to me.  But it was also very much appreciated,” said Stillahn.

“This is the perfect award for someone like him.” Said Gerry Meyer.  “Richard Stillahn exemplifies true community service!”

By all accounts, Stillahn is as steady and dependable as they come, the type of rock-solid person you can rely on and that every community needs.  He is also an active, devoted member of St. John Lutheran Church in Seward and very involved with his family.

“He was my mentor when I first got started in the Ag business,” Seward County Ag Society board member Doug Brand said.  “He was also heavily involved with the Seward County Fair and “showed me the ropes” before I took the reins of the County Fair leadership from him.

The annual Seward County Community Service Award is voted on by a panel of 12 citizens from across the county from all the communities in the county.  Of the nominees this year, 17 individuals received votes on the final ballot. Stillahn was he overwhelming choice.

Stillahn energizes Seward County through his work.  Directly or indirectly, he has had a hand in a lot of what happens in this county and community.

“Without community service, the community wouldn’t have much life,” he said.

Stillahn and his wife, Rolene will be honored on the Fourth of July, attend the Governor’s Reception, ride in the Grand Parade and receive his award at the Band shell following the parade.  His name is permanently engraved on a plaque that hands in the Seward Civic Center.