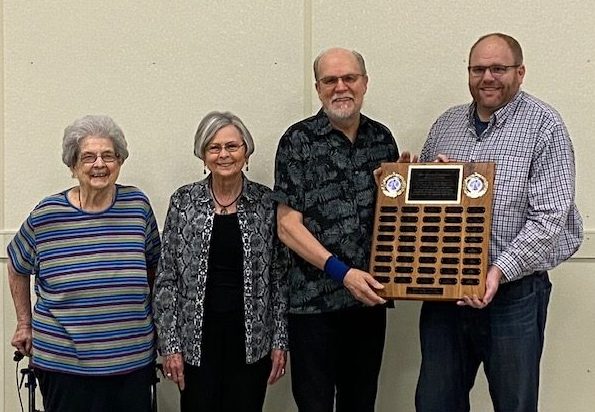 Roger Glawatz, Seward, Neb., is the recipient of the Seward County Community Service Award-2020. It is presented to individuals who have demonstrated outstanding public service and exhibited volunteerism in Seward County.  It was created to partner with the Seward Fourth of July Committee’s State Award, the “Nebraskan’s Friend Award,” honoring an individual that has served the State of Nebraska. “This is a way our community/county can honor a favorite son (or daughter) each year on the Fourth of July,” stated Jean Kolterman, the recipient of the first Seward County Community Service Award in 1971.

The Seward County Community Service Award plaque hangs in the Seward Civic Center hallway and lists all of the previous awardees and the year they won the award is funded and supported by a gift from the Jones Bank in Seward to the Seward Fourth of July Celebration Committee.  The selection is based first on a nomination for the award. This year there were 30 names nominated for the award from across Seward County.  Then a panel of 12 voters from across the county, where each vote for their top five candidates and rank them in voting order.

“This year it was obvious that Roger should be our candidate,” stated Jean Kolterman, who serves on the awards committee.  “He was the “run-away” favorite of the selection committee and is most deserving.  He will well represent the award!”

Glawatz was born and raised in Deshler, Nebraska, and is a 1966 graduate of Concordia University in Seward.  He was an educator at St. Paul Lutheran School in Strasburg, Ill., for seven years.

He returned to Seward in 1973 and began his work as a vocational rehabilitation specialist with the Nebraska State Department of Education. Soon after his return, he became involved in public service, serving on the planning commission, city council and as mayor. He is the longest-serving mayor in Seward’s history. For almost 39 years, Roger Glawatz served the City of Seward in several capacities.

Glawatz is a past Concordia Board of Regents member and Alumni Council president and served with the Concordia Foundation Nebraska as a Director.

On Jan. 8, 2015, Glawatz officially became a Seward County Commissioner — something he has wanted to do since he first ran for public office.   Glawatz said he was working with a mental health organization for the State of Nebraska in 1975 when he noticed the county commissioners had a lot of control over the future of the mental health center.

That’s what prompted him to run for office.  However, Glawatz soon found out that to be a county commissioner, he would have to give up his job with the state. “That’s not smart for a 32-year-old who needed a job,” Glawatz said.  So instead, he ran for the Seward City Council.   Glawatz said he ran twice against well-known incumbents and wasn’t elected until his third try in 1980, when he ran unopposed.  Every four years until 1991, Glawatz successful campaigned for his city council spot.  During that time, Glawatz said he served as council president and had to work with both the mayor and the rest of the council members.

In 1991, Seward Mayor Fred Welsh died and Glawatz was elected to finish Welsh’s term.   Glawatz served as mayor until 1994 when he decided not to re-run. He said he still had a young child at home.“I wanted to spend more time with him, and of course, my spouse,” Glawatz said.

After serving four more years on the Seward City Council, Glawatz ran for mayor again in 1998, succeeding Mayor Bob Elwell, and served until 2010.   According to Seward’s “Mayor’s Hall of Fame” document from the spring and summer of 2010, Glawatz served as mayor for 15 years, which makes him the longest-serving mayor in Seward’s history.

Outside of the Seward government, Glawatz served in appointed positions through the state government and worked with the Seward Foundation.

Glawatz, while listing his resume, said he often feels like he’s bragging, but said he tries to stay humble.  “When it gets down to it, I feel an elected position is an honorable position,” Glawatz said.  He said elected officials have to keep the trust of their constituents, because they are the ones that show support — or not.   “That’s why we call it a ‘democracy,’” Glawatz said.

Glawatz said he chose to work in local government because he believes that’s where a person can make the biggest difference for the people who appreciate it the most.

Glawtaz said issues that stand out to him over the years include economic development, the relationships between city and county governments, county comparability studies, working efficiently with the state, county roads and aging services.   “Aging services interests me. It always has — not just because I’m old,” Glawatz said with a laugh.

Overall, Glawatz said he enjoyed working and serving in a government position.   “I really love this county and the City of Seward,” Glawatz said. “I wanted to help,”

Glawatz and his wife Sharon are retired and live in Seward.