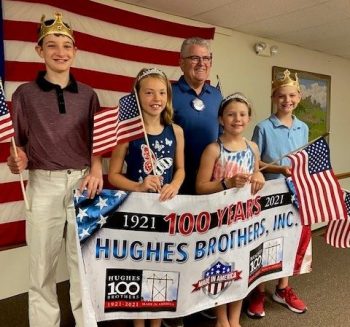 In the typical day in summer, I wake up and go to the park.  Then I walk down to Chapter’s Books or the library.  I like books.  The Courthouse Square is awesome.

Seward makes me feel welcome.  There is always some event like the Fourth of July going on in Seward.  Everyone is happy to help. I can walk to a friend’s house.

Everyone is nice.  They’re supper friendly.  They make me feel like I fit in.  Where ever you go, expect “Hi!”

It’s the best town ever! It’s the perfect size.  We have good schools like St. John, St. Vincent, Seward Public and Concordia University.

All in all, Seward is the best!

There are lots of things to do and places to go in Seward.

There are many good food places like Subway, Casey’s and DQ. At Subway, you can order whatever you want on your sub. Casey’s pizza is amazing. At DQ there is great ice cream and Blizzards.

In conclusion, I love living in Seward because there is great food, sports and places to go!

One reason why I like to live in Seward is that every year my family gets the Brown Boxes. The Brown Boxes are boxes that have different trips around Seward. This year there were two Brown Boxes. One was to visit the cemeteries of Seward County, and the other to view the wildlife such as birds, deer, fish, insects, and more. Last year my family and I went on one of the Brown Box trips for Ridge Road. My aunt came with us, and we did bingo cards, and to get a bingo you had to find things until you got 5 in a row! Some of the things you had to find were beehives, butterflies, birds, deer, and a pond. This year my family and I did the wildlife Brown Box first. We heard frogs, birds, and bees. We also saw some ducks, geese, and Red Winged Blackbirds. We also got to do a puzzle. Did you know there are many wetland areas near Seward? Did you know there’s an artesian well a little ways away from Seward in Cordova? It flows 4 hundred gallons of water per minute.

Another reason is because we get to go to the 4th of July parade. We get to go and get the candy from the street and watch the floats. After the parade we get to count how many candies we got. Once I got up to 100. One year I went to my Nana and Papa’s house for the 4th of July. I got 150 pieces of candy!

I’m also glad to live in Seward because of the parks it has! One of my favorite parks is the military park. There are 2 slides and it is shaped like a helicopter! Inside there is a board that shows you all the states. Plus, there is a tunnel, and it has pretend helicopter gears. Another park is the Elementary Park. It has 5 slides and monkey bars. It also has tire swings and a wobbly ladder. I love the Elementary Park because of all the fun equipment it has. They built a new Elementary Park, but it’s twice as good! And one more park is Karol Kay Park. It has a long spiral purple slide and four other slides. It also has monkey bars, merry-go-round, and swings!

My 4th favorite thing I like about Seward is the county fair. The first thing we always go see are the rabbits. Then we go to see the chickens, tractors, and the 4-H building. I always go to the rabbit show.

I love Seward so much especially because of the school I go to! St. John is an awesome school, and it has an awesome playground. It also has awesome teachers like Mrs. Gebhardt, Mrs. Soflin, Mrs. Meyer, Mrs. Royuk, and Mr. Meyer.

I hope you love Seward as much as my family and I do! Have a happy 4th of July, everybody!

Hey there! Do you want to know all the fun parts in Seward? Because, it is not an everyday, boring town. It is better than an old town.  Seward is a great place to live if you’re trying to find a home.  It has fun places, food and outdoors.

Let start with the fun places.  We have a bowling alley. If you are a toddler that wants to go bowling, it has a dragon shaped slide for the kid to have little boast.  We also have a swimming pool.  It has a diving board, a slide and a kiddy pool for every age to have fun.  Let we have a water tower.  Don’t judge me by my likes.  It’s useful. The whole town gets fresh, clean water and guess what? There are two of them!  I’ve been here my whole life, and I don’t know some of the parts of Seward.  To me, the town is pretty big.

Next, we have food.  There’s Runza. Their food is great.  It’s not that big but it is useful. Also there is Sparetime.  It is next door to the bowling alley and you’re in luck-they have fast food.  It takes them 20 minutes.  Last, there is Café on the Square. It is a real Café.

Finally, of course, we have outdoors.  The bike trail is fun, long and perfect for exercise.  I like the highway.  What is a highway doing in town? No one knows. There are lots of parks scattered around Seward. Last, you can find lots of baseball fields and lots of sports.

Well, I hope you had fun on the tour of Seward. And if you’re still trying to find a home, why not try Seward?