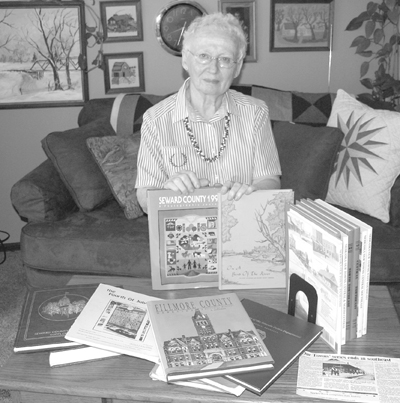 Getting involved in serving the community is something that comes naturally to Jane Graff of Seward. “When things need to be done lots of people step forward and share their talents. That is what community service is about,” she said.

Graff is the 2011 Community Service Award winner. The award was announced at the Fourth of July kick-off luncheon June 14. “It¹s a humbling thing,” she said. “When you read through the names, I feel honored to be counted among them.”

“Seward blooms with everyone that does community service. I’m real proud to have Seward as my address.”

Graff grew up helping out on her family’s dairy farm near Seward. During World War II, when she was around 11, she assisted her father on the farm. “I was my daddy’s boy because my brother was only five,” she said. “I enjoyed working out in the fields.”

Graff said her first volunteer job was as a swimming teacher as a teenager. She helped Bill Dowding teach swimming lessons. In high school there were all kinds of projects to volunteer for, she said, listing Y Teens, the Homemakers Club, plays and decorating for games among the things she did.

After graduation, she worked as a stenographer for the state YWCA for two years and then married her high school sweetheart, Bud Graff, and settled down to have a family. “At that point volunteering comes simple. The telephone rings and off you go,” she said.

In 1957, the Graffs bought their first Vizsla dog and started attending meetings and field trials. They raised and showed Vizsla dogs, and she served as a national secretary for the Vizsla dog club. She also edited the monthly Vizsla newsletter for five years, which got her set up for work as a writer. “I certainly didn’t set out to be a writer when I was growing up,” she said.

Having edited the Vizsla newsletter for a few years, she said she had the equipment for writing when it came time for the Seward Centennial and somebody was needed to pull together the information on how Seward was established. “We needed a book about the history,” she said. “The people who knew about it were too old to be able to write. I worked with them to get the story told of Seward County.” The book was On a Bend of the River.

“I learned a lot about Seward County while writing the book and even more after the book was published,” Graff said. “After writing a history book, all the history in the world comes to you. Everyone would tell their stories versions of the same story.” That has led to a number of books documenting local history of communities and people, most done as volunteer work, Graff said. She has written seven volumes of Nebraska Our Town. The books are compilations of basic information from every incorporated town in Nebraska books together.

As she wrote the books about Nebraska history, Graff decided she needed some additional education. She took classes from Concordia College (now University) to help improve her writing skills.

In addition to collecting history on Seward, Graff has been involved with the Fourth of July Committee from the time efforts began to organize all the different local events held around the Fourth into one community-wide event. A more recent development that Graff helped bring about in the Fourth of July Celebration is bringing in a trolley system. “It’s challenging to have 30,000 people come to a town of 6,000,” she said. Parking cars is especially challenging, but the trolleys allow people to park in outlying parking lots and ride downtown. Graff discovered the trolleys at the state fair and brought them to Seward.