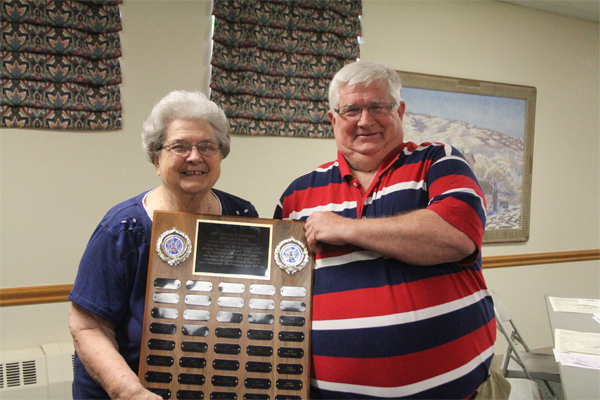 Denny Erks was “flabbergasted,” in his words, when his name was called as the 2012 Community Service Award winner.
“I had no clue,” he said. “I was happy and shocked.”
Erks has been part of the Seward community since 1973, but he’s lived in the county all his life. He grew up in Utica, where his mother Christine and brother Stan still live.
After he graduated from Utica High School, he served in the U.S. Air Force beginning in 1966. Four years later, he said, he left the Air Force and joined the National Guard, where he served for 16 years.
While in the Air Force, the closest he came to the war in Vietnam was a tour in Hawaii. His service allowed him to be a member of the Seward American Legion Post 33.
Erks moved to Seward when he finished in the Air Force and joined the Jaycees in 1973. He was a member of the organization for about 10 years and held most offices, including regional and national, he said.
“The Jaycees were the biggest influence on me,” he said. “They got me to be outgoing.”
He learned how to speak to groups and deal with people through his time in Jaycees, he said. The group disbanded in the 1990s.
One of the things Erks is most proud of from his time in Jaycees is a Fourth of July planning guide he and another member put together. The project won both state and national awards, he said.
Erks is also a founding member of the Seward Youth Center and helped build it. He was the second president of the board. He is also a member of the Seward Youth and Community Club and is a liaison with the Boys Scouts, helping organize and put on their annual fundraiser breakfast.
He is a founding member of the Seward Booster Club and was a member for about 10 years, he said. He’s on the City of Seward’s Parks and Recreation board and served on the worship board at St. John’s Lutheran Church for five years and as an usher for 10 years.
But Erks really loves baseball.
“I’ve always been on the Seward Baseball Association,” he said, adding he’s been part of it for 25 years and is the current president.
During his 29-and-a-half years at Tenneco, Erks played on the softball team for two years.
“That was always fun,” he said.
The team got to travel to Wisconsin and Michigan, among other places, to play other Tenneco teams.
He also played for the Seward City Cleaners softball team, Merle’s Flower Shop and a fastpitch team from Ulysses. He played fastpitch softball for 10 years and slowpitch for 15 years.
While playing for Ulysses, Erks and the team got to travel around the region, including to St. Joseph, Mo., for games.
Erks was his team’s catcher usually but also played third base for fastpitch teams. While he played third, teammate Gary Hafer nicknamed him Brooks Robinson, who played third base for the Baltimore Orioles.
“It was fun. I had a good time,” he said.
He got to play with his son, Scott, for two years. Scott was a shortstop.
Erks was also an umpire for both baseball and softball for 22 years.
He also coached t-ball through junior Legion teams when his children were young. He served as a coach for two years for Seward town teams
“I loved working with youth,” he said.
You might also recognize Erks if you saw him behind a score clock at Seward High basketball and football games. Erks has been running the clock for basketball since 1979 and for football since 1983.
Last year, Devin Smith, Concordia University athletic director, asked Erks to run the clock at CU events, as well.
Erks and his wife Connie, who is originally from Waco, have been married for 45 years. They have two children—Scott, 38, who lives in Springdale, Ark., and Nicole, 41, who lives in Lincoln. Scott has a seven-year-old son, Myron. Nicole has three sons—Zach, 9, Ethan, 7, and Noah, 5. All four boys play baseball, but Erks said Myron is currently the most passionate about the sport.
The Community Service Award honors a long-time volunteer in Seward County. The winner will be recognized at various events throughout the Fourth of July and will ride in the Grand Parade.