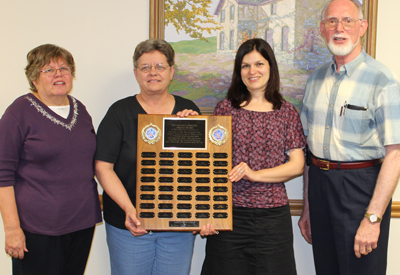 Louise Warnsholz of Seward received the Community Service Award during the Seward Fourth of July Kick-off lunch June 11.
Warnsholz serves as a co-leader of the Seward County Special Olympics team that is sponsored by the Arc of Seward County.
“I’m just a small part of it,” she said. “It’s really a team effort.”
Warnsholz said it takes a lot of work by numerous people to keep the team going.
“I keep track of the uniforms and equipment,” she said.
Warnsholz said her involvement with the Special Olympics team was a result of her son Christopher’s involvement with the team.
“He loves sports,” she said.
Warnsholz said Christopher got involved with Special Olympics when he was eight and continues now at age 35.
“I would go to watch him anyway and take him to practice, so I might as well help with it,” she said.
Warnsholz said Seward County’s team has grown from about 10 athletes back when she first got involved to about 40 now.
The Special Olympics provides a number of benefits including exercise, a chance to compete and involvement in the community, she said, and it’s open to anybody from eight years old up to age 70 with an intellectual disability.
Warnsholz said nine years ago she helped with starting the annual Special Olympics sports banquet, which is an opportunity to recognize the team members for their efforts throughout the year.
In addition she serves as chair of the Honey Sunday fundraiser.
“That’s our only fundraiser all year,” Warnsholz said. “A lot of work goes into that. It’s county wide and we try to travel to as many communities as we can.”
She said during Honey Sunday volunteers travel door to door to sell honey as a fundraiser.
Also, Warnsholz served as CCD teachers for a number of years at St. Wenceslaus Church in Bee as well as working with the altar society and is involved with PCCW at St. Vincent de Paul Catholic Church in Seward.
“I thank my husband for supporting all the things I do,” she said.