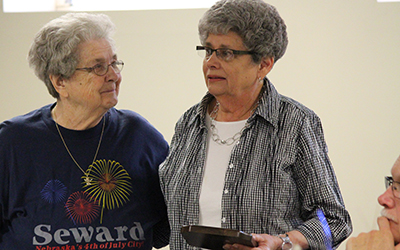 Imig was nominated for the award and selected from a pool of 21 candidates based on her community involvement and service efforts throughout the county over the years.

“It’s an honor to be honored by Seward. There’s so many people who do stuff in this community,” Imig said. “I learned from the best.”

Imig taught fifth and sixth grade for 20 years in Seward, Garland and Goehner before substitue teaching for 12 years.

She has been involved with Friendship Force International, an organization that provides cultural connections across the globe, since 2006 and has been a part of the Centennial Players in Goehner for 20 years.

Imig also volunteers at the Seward Memorial Library and is a member of the library¹s Friends group. She is on the Memorial Health Care Systems Board of Directors, co-chair of the hospital bazaar and volunteers with assisted living. In addition, Imig was president of the Nebraska State Reading Association, is co-chair of the Seward County Spelling Bee and coordinates the Reading Classic contest for area schools.

Imig will be honored throughout the day on July 4, ride in the Grand Parade and be honored in the evening at the Bandshell. The award is selected by a panel of residents from throughout the county who vote on the nominees.